12 Tips To Keep In Mind During Mobile App Development 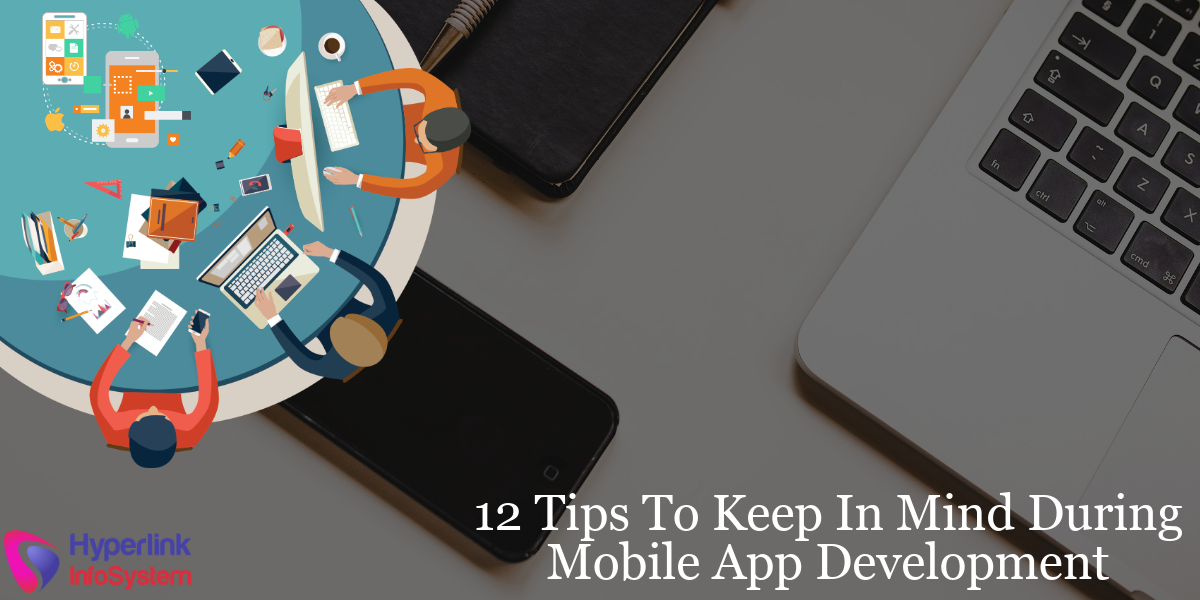 Are you thinking about creating an application? Do you know what are the keys that will make your mobile application a top choice? It is difficult, when the applications market is growing at such a fast pace, to keep abreast of all the technological changes that occur, but there are a number of essential keys and resources that serve to get the most out of mobile analytics, understand the cross-platform development and create an app that is effective in terms of cost.
How? This article summarizes it in 12 essential resources:

1. Applications generate extra revenue for companies
From using specific services such as GPS to the simple fact of walking with a laptop in your pocket, smartphones offer opportunities that are now even imaginable for large and small companies. For this reason, companies are taking advantage of mobile applications to generate extra income through geo-segmented push notifications, dynamic offers or mobile data collection, among other strategies.
2. Does it help to create an NFC app now?
Some of the latest technological developments in the mobile industry seem more like a magic trick than a reality, and many top advertisers are trying to figure out how to take advantage of these possibilities. The NFC has been underway, in a minority, for some time, but although top tech companies like Google have tried to make it a great global standard, the presence of this technology is still a minority. For now, to take advantage of the NFC, it is key to understand it as a complementary technology, and not as a technology in itself.
3. Get the most out of mobile app analytics
When creating a mobile app it is essential to establish a clear strategy, the design is key and fundamental solid development. But analytics is key to being able to measure the execution and value of all the work that has been dedicated to the app. And as smartphones have a predominant role in each aspect of our lives, it is logical that advertisers and developers make an effort to measure the behavior of users through the analysis of the application.
4. The usual complaints of users
Applications were born to make life easier for users. But while some are very efficient and practical, a user will never cut a hair when complaining on Twitter, or any other platform, all kinds of problems, inconveniences or difficulties you have had with the application. Problems such as irrelevant push notifications, excessive requests for valuation, unnecessary connections with Facebook or full-screen ads are usually some of the things that irritate users the most.
5. Native applications will overwhelm web applications
More than a decade ago, when Steve Jobs introduced the original iPhone, there were so few applications that barely filled the screen of the phone and Apple did not allow installation or create extra apps, so app developers India created web apps so that users could access through the browser. Since then, and with the permission of Apple to create native apps, the picture has changed a lot, but everything points to the proliferation of smartphones and operating systems, especially with the struggles between iOS and Android, web applications are going to be the most attractive and profitable solution for developers.
6. Learn from the leading mobile applications
When it comes to designing and developing an app, the best way to learn is to see what is working in successful applications. It is not about copying all the interfaces or designs of a popular application, but seeing what functions of an application make it both beautiful and functional. The lessons learned should be applied to the project itself.
7. What language should you use?
With 2.2 million apps for iPhone and 2.8 million for Android, when deciding to launch in this market creating an application a key step of the process is to choose the most appropriate programming language, and that depends on the level of precision that is want to reach. Determine what is your audience and what platform you are going to use, and then assess the pros and cons of using one or another language.
8. Create a mobile application that does not leave the battery dry
A few years ago a mobile phone could spend two or three days without charging. A whole week in the case of the less enthusiastic. But today, with iOS and Android this is unimaginable. Now, games, cameras, maps, and videos occupy our mobile constantly sacrificing the battery to offer us a range of just a few hours. Last year, a Purdue University study with Microsoft revealed that the application that served Android advertising was responsible for 75% of the battery discharge and that it worked by serving ads in free versions of apps like Angry Birds or the New York Times.
9. Look for tools that allow you to create a cheap application
With the massive growth of the applications market, a parallel industry has been created related to the proliferation of accessible and low-cost development alternatives. Not all major brands and top-tier companies need diverse and expansive functions in their applications. In addition, the launch process for many of them can be more useful based more on the interaction with customers and the creation of response.
10. Avoid mistakes
Designing the structure of an application, integrating functions and shaping the result that the app will have is not easy since there are all kinds of parts that are changing and it is essential to always keep in mind the aspects of management of the project. The development of a functional and attractive application requires discipline and practice for it to be at the top of the pyramid. It's no use accelerating to put yourself at risk.
11. Avoid errors in the development of the application
With the speed at which innovative products are developed, there are more and more possibilities of making mistakes that destroy the product or even the entire business. When developing an app, you can make mistakes that you could never have imagined before, but it is these errors that help you learn.
12. A cross-platform design
Some top companies can only focus on one operating system, excluding the rest of consumers that use other types of devices. But most companies cannot stop being on all types of devices. The problem is that the development of an application for all platforms is complex, especially when there are limited resources. That is why it is essential to have the help of the most economic development tools or the different existing languages.
Back