Augmented Reality App Development And Its Benefits For Business 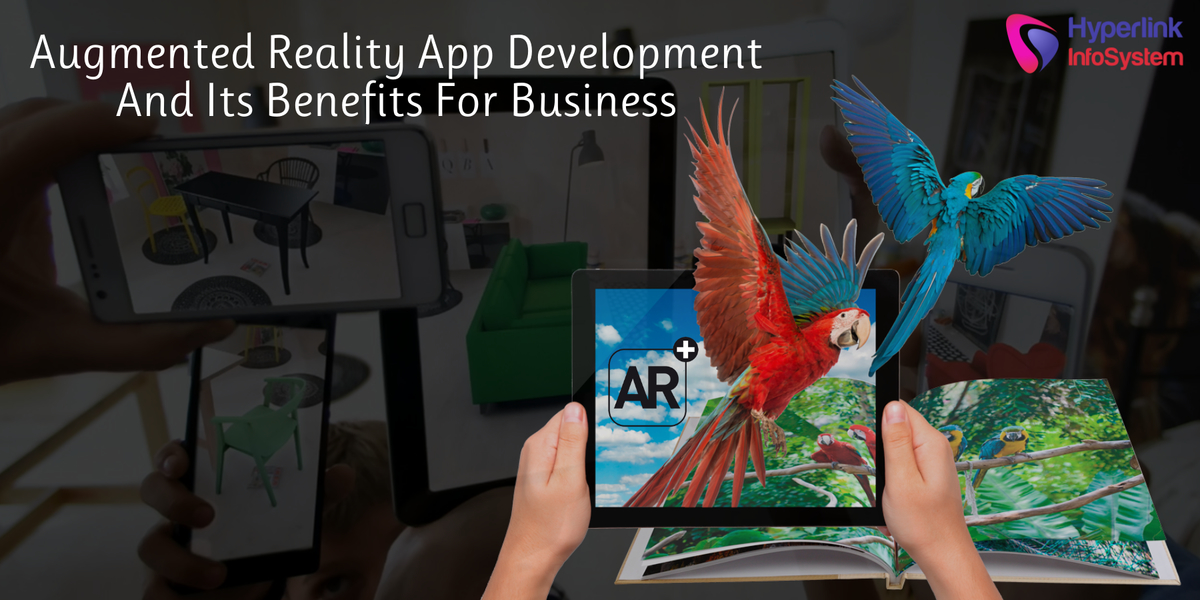 In the past, we could only imagine some things. Today, with augmented reality, your imaginations can now be brought to life. Augmented reality is simply adding computer-generated sensory input, to enhance real-life or physical elements. This could be either direct or indirect, and it makes use of several inputs such as; GPS data, sound, graphics, videos, and so on. The first AR systems were developed in the 1990’s by the U.S. Air Force Lab, Armstrong.
Augmented Reality has slowly crept into the modern world with several improvements, cutting into various spheres of life. Business is beginning to value the effects of augmented reality on user’s and are beginning to adopt it into their strategies. For a business to grow, it is vital to reinvent your brand by following the new technologies and applying them to your marketing strategies.
Augmented reality, however, is not something that can be developed easily. For your brand to work on Augmented reality, you need to understand the scope of Augmented Reality App Development. Developing a customized augmented reality application for your business is the first thing to consider. As you cannot do that on your own, there is AR app developer around that are ready to help with that, here are some of the tools used to develop AR applications for smartphones, tablets, and even smart glasses.

There are numerous tools, created by various companies which are used in developing AR applications for a smartphone user. Some tools work for Android devices only, some work on both Android and iOS devices and different AR gears. It would be necessary to get acquainted with all these tools. However, there are some common tools used in Augmented Reality App Development, and they include:

AR Labs SDKs are available for both Androids and iOS devices. With an AR Browser SDK, POIs can be added or removed from any scenario just at the tap on your screen. The POIs can be touched and viewed with a camera. Sharing actions can also be made on them, just in case you want a friend or your Facebook followers to have a look. The image matching SDK allows you to create a gallery of pictures, matching them to your own image without an internet connection; it also allows barcode and QR code recognition.

Metaio SDK is another tool that has its own peculiar characteristics. This SDK supports 2D and 3D images or objects, SLAM and location tracking, face, QR and Barcode recognition, gesture recognition, visual searches both online and offline using the Metaio CVS. This SDK is used to develop Augmented Reality apps for Android, Google Glass, iOS, Windows PC, Epson Moverio BT-200 as well as Vuzix M-100 or use Unity. Metaio has its own AR language script, which makes Augmented Reality App Development easy, as developers can develop apps from common web technologies.

This platform available for Android, iOS, and Unity, is gradually changing the face of AR in smartphones. It features Multi-target detection, target tracking, virtual buttons, Smart TerrainTM, and Extended Tracking. Some of its targets are objects, images, and English text. Vuforia also allows AR applications to use images from databases on the device or from the cloud, during image detection.
There are other tools like DroidAR, which adds location-based AR functionality to Android apps. Wikitude AR SDK that can be used as a module for Titanium and a component for Xamarin, and a host of other tools.
This means that there is a tool to develop an application for whatever business you are into. Sales, manufacturing, and even medicine, you can create an application that gives your customers a feel of your business in an interesting way.
Augmented Reality in Business:
Once you have your AR apps on lock down with the right tools for your business specification, you can go ahead to give your customers more insight on your brand. The concept of augmented reality might still seem odd, but here are some professional fields and the role AR have played in advancing them.
Archaeology:
Over the years, there have been some achievements in archaeology, and this is due to deep research, and the input of Augmented Reality. With Augmented reality, an archaeologist has been able to rebuild ancient ruins, having more insight into how old civilizations lived and made more documentation.
Architecture and Engineering:
In rebuilding and refurbishing, Architects have also hit a milestone with Augmented reality. It can be used to visualize proposed building, either in 2D or 3D. With the recent improvements, Augmented reality allows a see-through of architectural designs, to give customers a view of the interior of the proposed building.
An engineer can couple their machines with Augmented reality applications before they get to work. The error can be detected, and corrections made before the actual coupling of the machines. CityViewAR is one tool that has helped to develop AR applications that have helped architects, engineers and construction workers over the years.
Medicine:
Augmented reality is important in modern day surgeries. It provides the patient's records in a way the doctors cannot only understand but enjoy. Virtual X-ray view based on previous computerized tomography (CT)or real images from ultrasound, visualizing the location of a tumor spotted in an endoscope video, or radiation exposure risks from X-ray imaging devices. All these and more are viewed with the help of Augmented Reality. For expectant mothers, you can now view the position and size of your Foetus clearly; this is aided by AR application.
As a business owner, even a start-up, it is advised to explore the world of Augmented reality, this will bring drastic change to your business. Augmented Reality in marketing has also broken the barrier. This is another option for you to consider. With the constant development in Augmented Reality, more can be done in business and this, in turn, improves the economy of the world. Of course, there will be money spent, but the benefit will even be more rewarding.
Apart from smartphones, tablets, and Eyewear (smart glasses, HUD, Eye tap, laser eye tap), researchers are considering other options to view AR like Contact lenses and Virtual retinal display. Spatial Augmented Reality (SAR) is also high on the list, in which the AR is projected for the user’s pleasure.
Desktopography, a new form of AR which is focused on viewing your computer on your work desk is still under development. This AR would be achieved with the use of a specialized light bulb over your desk.
With these and more to come, nothing is stopping you from investing in augmented reality. This will help improve your business beyond your imagination and save you the stress of cumbersome explanations and marketing strategies.
Back