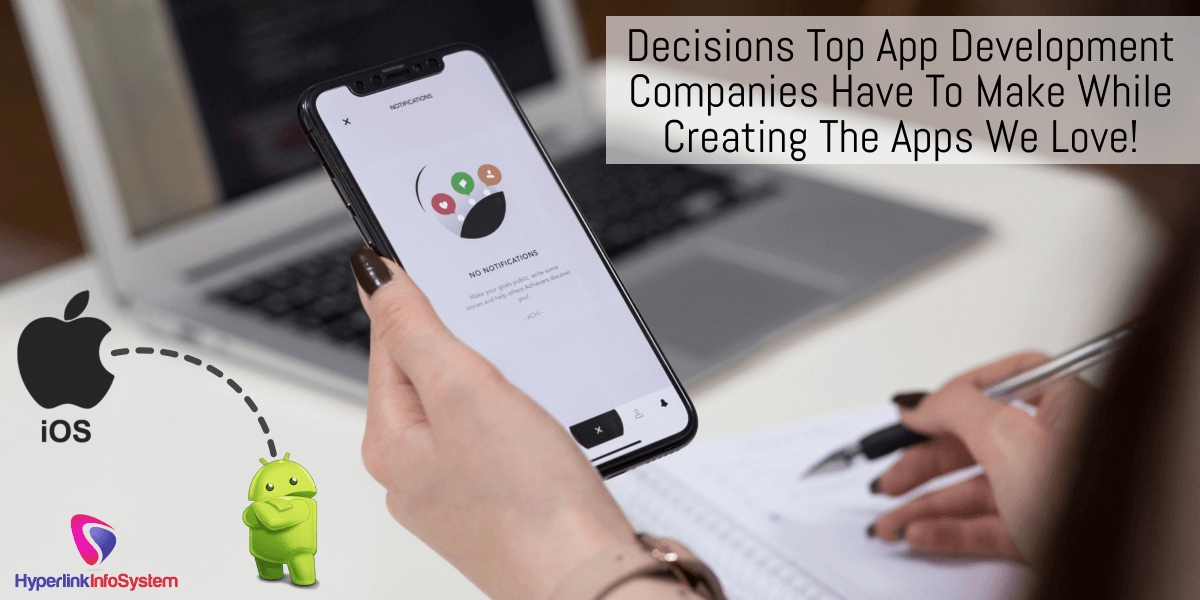 All of our mobile devices rely on applications to function at all. There's no use explaining how every aspect of our electronic gadgets require one app or the other to run, but what has to be said is how without these apps, what we are lugging around are pieces of plastic, glass, steel, fibreglass (or whatever high end finish the manufacturer chooses to employ).
Having established that we need apps for our devices to give us the joy that they do, it is only fitting to wonder what decisions inform the making of the apps that we have and love.
Mobile app development companies have to consider a number of different points when creating apps. In this article, we will discuss each decision they take and how it leads to the apps we have today, one of which you're reading this article on.
Decision 1: Audience

Before even deciding on what name an app will have, the audience for whom it is meant must be decided. Deciding audiences makes use of so many different distributive statistics.
Age is one of these distributions. Developing apps for a particular age grade is not uncommon. For example, younger users are more likely to be interested in photo sharing apps than older persons. Adults in their late 20's and above will most likely have more use for parenting apps than teenagers and senior citizens. Other criteria apart from the age that may be used include: location, income bracket, interests like sports, fashion, music and much more, the list is endless.
These are just examples cited to buttress the point, but in actual fact, top app development companies spend tons of money every year on surveys to find out what types of apps to build for whom. They try to ascertain who will be most welcoming of their apps and use such information to tailor things better.
Decision 2 - Platform

Today, there are two major mobile platforms: Google's Android OS and Apple's own iOS. The statistics have it that 85% of the world's mobile device users operate one version of Android or the other. The others use iOS. Therefore, answering the question of which mobile platform to develop apps for usually has three answers:
- Android
- iOS
- Both
To decide on which answer to go for, the developer considers a number of factors and how they affect their plans for the app being developed.
If the aim is to reach more users, then the Android ecosystem is where to go; with its larger worldwide acceptance, probability dictates that there's likely to be more users of the app. Developing for the relatively fewer iOS users also has its perks. Studies have shown that iOS users are more likely to pay for mobile apps or make purchases in-app than android users. Therefore, monetization calculations favor iOS than the android market.
It is also interesting to see how this platform consideration works hand-in-hand with audience selection. Here's a little mental picture: Americans use both Android and iPhone almost evenly; Europeans are more Android oriented. Therefore, location-based audience selection influences the choice of platform in this way.
Top app development companies who have made some of the most widely used apps have found success by targeting an even wider range of users on both platforms. However, deciding to focus on one is not a terrible idea due to how some app functions are better suited on a particular platform than another and based on how device specifications may affect how the app performs.
On a final note in this section, a platform is not just one device. There are about 17 different Apple devices alone, each with its different specs that app makers have to put into consideration. The table for Android is even more crowded. There are about 200 different recognized makers of Android devices, some of whom may even have over 100 models.
The decision making for app developers is not made any easier by these factors, but they somehow manage to tailor an experience to each platform, brand, device and ultimately the user.
Decision 3 - App Type (Native, Web or Hybrid app)

This should be decision 2b really but it is such a broad topic that we wouldn't even be able to scratch the surface here. This decision means basically deciding how to build the app.
A Web app is an application run like a website, it possesses all the functions of a native app but is not stored on the device. A typical example is a facebook when logged in online. Websites provide information while Web apps add functionality to the mix to shake things up. Web apps are easier to build but cannot be distributed through conventional means.
Native Apps are built specifically for particular platforms. An app may be coded to run on an Apple device or Android device specifically and they are coded as such. They function best because they take into consideration the abilities of the devices in question.
Hybrids tow a fine line between both types of apps, they are downloaded as would a native app and functions like a web app.
Top app development companies have a lot of factors to consider before choosing one type or the other. Long-term goals and needs are at the forefront of such discussions.
Decision 4 - Monetization

Top app development companies usually make money from mobile apps in any or a combination of these ways.
- Purchase of the app
- In-app advertisements
- In-app purchases
How money is going to be made from an app depends on its own set of factors. The most important one is what the app makers hope to achieve. If the aim is solely to make money, then it can be made a paid app; if the app is made to keep the brand in mind, then ads will help to make some income. Games employ in-app purchases to make their own money. Therefore they generate more money over time.
Decision 5 - The Interface (standard or custom)

While most platforms have a basic look that is standard for apps - a look that is inexpensive and less stressful, the best apps are custom designed. But in making these custom designs, consideration for ease of use must not be sacrificed because then the app usage will surely suffer.
In conclusion, the final factor considered is the future, top app development companies usually outline a specific plan for updates, maintenance and further improvements to keep their apps relevant. Neglecting the future based on today's revenue is dangerous to app success.
It is now visible that a lot of thinking goes into these apps that make our devices come alive, say a silent word of thanks then, to the developers who made this app you're on right now.
Back