Why Are You Still Waiting? The Latest Features Of iOS 13 Has Been Announced 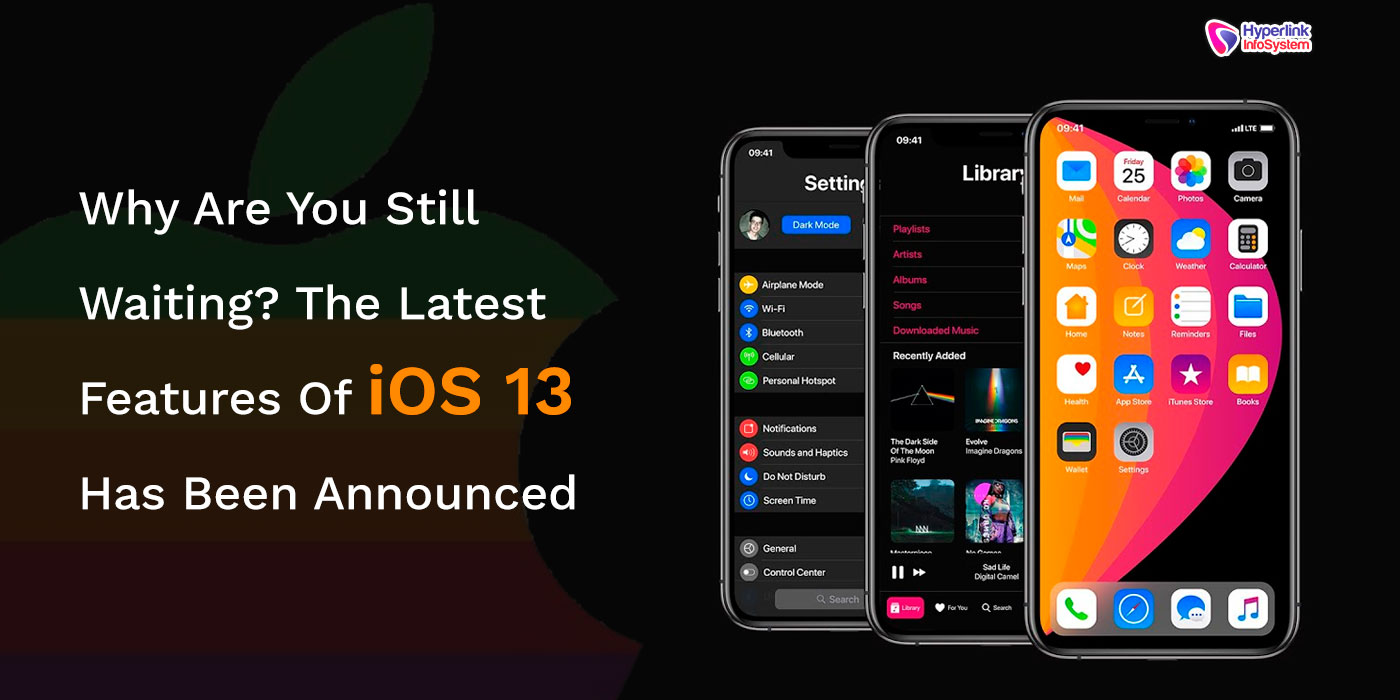 Apple has a popular market among smartphone users. Each version of iOS has introduced new features that enable its users to promote the usage level of the app. Recently an exciting announcement has given by Apple Inc. in the Worldwide Developers Conference 2019 held at San Jose, California that they are launching a new product with interesting updates, including the Operating System.
At the event, Apple has introduced Pro Display XDR and Mac Pro which made everyone get excited. And also they have mentioned the iOS 13 which went viral among the tech industries. As per the report, iOS 13 will offer an improved feature of iOS with its inbuilt apps. The new features can compatible with the iPhone 6S and the later versions of the iPhone. Thus I have mentioned the top features of iOS 13 which will helpful for iOS users.
1. Save your battery with Dark Mode
Dark Mode is a feature that attracted the most iPhone users towards them recently which has been announced in the Apple Worldwide Developers Conference (WWDC). iOS 13 is offering this feature as an update that it will be more reliable with a wide display and can view at a system-level as well as in applications. It allows you to save the battery level and also the user can use it with a long time of usage. Dark Mode feature allows you to process manually and also automatically as per you schedule it.  Wallpapers of the new series of dark-mode get released with the iOS 13. This feature allows the third party to integrate this new feature easily into their apps.
2. Edit your Photo with an improved feature
The happy news is that iOS 13 allows its users to edit the photos with a set of editing tools. It not only allows the images but also enhances with the videos. This tool allows you to edit, add effects and filters, as well as rotate your videos. And binding with the tools such as shadows, contrasts, highlights, brilliance, and noise reduction will add an advantage to your images.
The photos get improved with its user-friendly interface and state-free presentation of all your captured images.
3. Experience Your Route with the Precise Map

The user experience with the map is gonna tremendous hit in terms of precise route. iOS 13 has made with its feature get the update and modified with its tools. It gives assurance that you can travel down 4 million miles with accurate addresses and don’t confuse the path that you require for the destination. A feature is added additionally to the iOS 13 map tool which shows up the 3D view of a place, similar to Street View by Google. You can select the route that is sufficient by you in terms of the route with its detailed maps.
4. Swipe Your Keyboard to Flow the Words
If you are keeping busted towards typing, then iOS 13 has bought a feature that makes the user get inflow for texting. The Quick Path Keyboard allows the users to swipe with ease across the keyboard to form a word. Many third-party apps have this feature to access with your Apple but iOS 13 has given its functionality to access the keyboard with a swipe. Now iOS users don’t require another app to access its keyboard.
5. Voice of approachment has changed with Siri
Artificial intelligence is getting improved day by day with the help of developers. Many app development companies were getting most of the projects based on AI and as Siri introduced, it has been placed mark in the iOS users. Most of the users were welcomed this feature and now the iOS 13 has introduced an improved version of Siri. They had made an effort with the neural TTS. It means, the voice of Siri has controlled and delivers a voice of human than the mannerism of a robot. It was designed with a location-based response to its users.
6. Interact your Message app with New Memoji characters

Everyone wants their communication with more to react able and reasonable. Emojis have shown interest between the users. As per the iOS 12, it has been released its version of Memoji, which helps to customize the Animoji for themselves. The iOS 13 has introduced three new Animoji characters such as an octopus, a cow, and a mouse. It will be more fun to use these kinds of characters in communication. The custom creation of these characters can compatible with iPhones. It can use in communication.
7. Interact with Your Reminders App
The pre-version of iOS has experienced the performance of the reminder app and bit confusing with their interaction. This lack of the previous version has been noticed by the techies of Apple and made a sophisticated version of the reminder app that enables the user to get engage their work without any kind of interpret. It synchronizes with your messaging apps to give you a function as smart filtering options like Flagged, Today, All, and Scheduled. It allows the user to get interact with it.
8. Clubbed Together for the App My Device
Apple has been announced to merge two of its app, Find My Friends and Find My iPhone. It clubbed together in a single application. It senses that iOS 13 users can track both their device and as well as their belonging ones via a single app. The most interesting factor is that you can access it in offline mode too. If the mobile is offline then it can operate by a Bluetooth beacon which allows it to sent securely to the nearby iOS device. It will be relayed to iCloud before reaching you.
Final Words
The above feature that I have mentioned is an official announcement by Apple Inc. Each feature will enable the iOS user to interact with the apps for further usage which is far better than the previous version of iOS.
Back