Aspects To Consider Before Developing An App 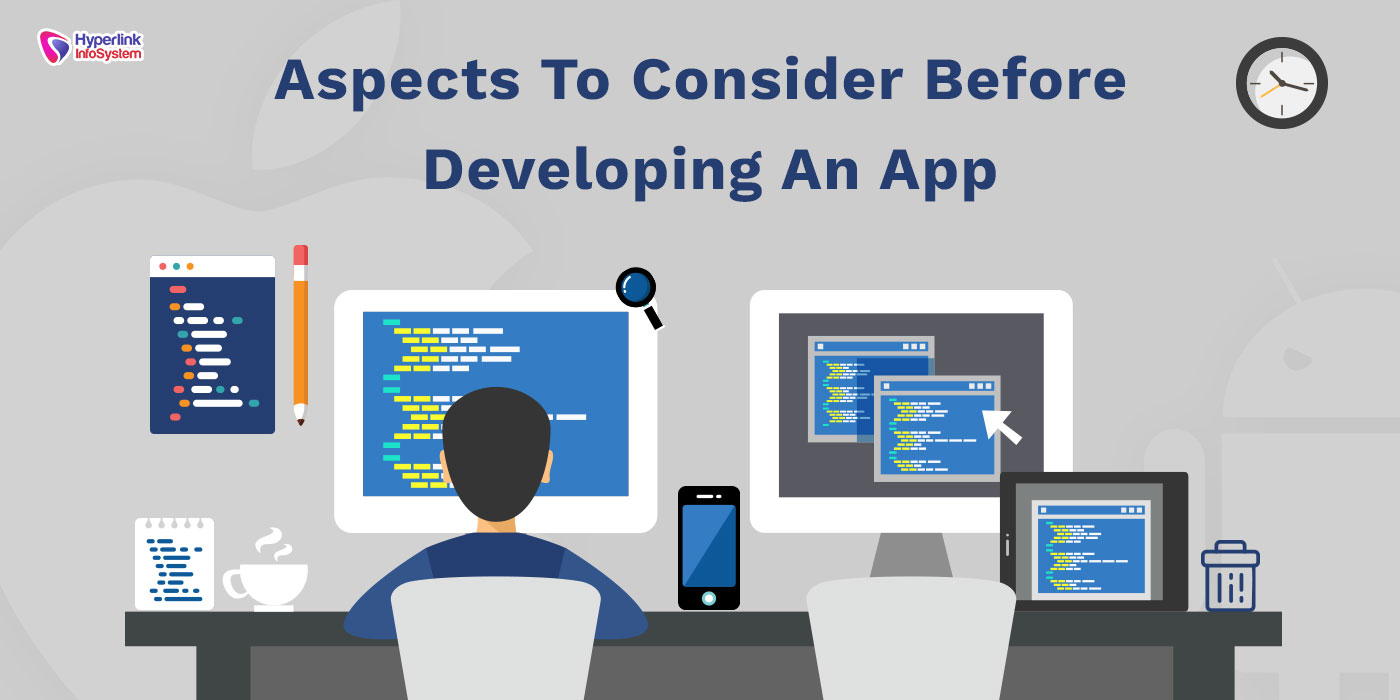 There are various factors that you should consider before creating an app. Just like the popular saying “if you fail to plan, then you have planned to fail”. To ensure that your time, effort and money don’t result in failure, you should contact Indian app developers for your app development and ensure that you carefully consider the following factors:
Analysis of the competition:
The first thing is for you to analyze the competition. Make research on what your top competitors are doing and you should emulate and improve on them. Knowing what your competitors are doing will give you an insight into the best practices for your business.
Platforms:

Which platform do you want to use? Currently, the most popular platforms are iOS and Android. There are 2 points here to consider:
1) Do you want to use both platforms simultaneously? It is ideal to start with one of the platforms to be able to measure your result. The feedback you get will guide you in developing the app on the other platform excellently. The devices that the majority of your audience is using should be considered in this case.
2) Do you need a different version for smartphones and tablets? This is only practical when the way the app displays is different on tablet and phone. For example, an app that can be used as a second screen when you're at home (tablet) compared to something lighter for when you're away from home (smartphone). You will have time to develop a different app for tablets if in your metrics you see that the users behave differently. You should act on the basis of metrics. That is, you should work on real users’ data and not spend money on development by simple intuition that often is not met in reality.
Design:
Do you already have your app designed? Here are also 2 key points to consider:
- Wireframes: this refers to a sketch of your app. It would be nice if you have a clear definition of what the application will be and know the features it contains (it will show the image, video or audio, text, like button, user profile button, related content etc) on different screens. There are online tools that can help you examine the design and UX of your app. These tools perfectly explain the operation of the app and that will let you reflect on the steps that the users will go through before installing the app.
- The final design of the app: Do you already have the app designed for different screens? Are your images professional? Do you have a designer in your company or do you need to contract the design of the app? This is not the most expensive of an app but it is necessary to define what you want and if you will contact Indian app developers.
At the level of data structure, will the app need a server? Do you already have the back-end mounted or do you need to develop it? This is a critical point that often affects development very much. It must be the first thing to be ready because it ends up affecting the whole app and without it, you cannot guarantee the operation of the application.
Timing:

At this point, you should make a call to calmness and reflection. Everyone seems to be in a fierce hurry which then translates into bad decisions and a bad product. Development of a mobile application takes on average about 3 months. If the app is complex, the time can be extended.
It is understandable that you want to have your project as soon as possible but you must focus on your product.
By experience, in the end, it is usually the company who delays the development of the app because when Indian app developers start working on the project is when more ideas and changes come to their (company) mind and that is a very dangerous moment.
Introducing lots of changes isn’t the best for the project. First of all, because the development was thought about a specification, that if it changes can bring difficulties. The changes could also affect the budget. Secondly, when this happens, the tendency is to add many more features, never to remove them and that supposes that the development lengthens. During app development, many promoters end up introducing changes that lengthen the development when at the beginning it seemed that they were in a hurry.
So the corollary should be that you are able to analyze your project, comment on it, add and remove functionalities and conclude on every feature it should have in the process of conceptualizing the app before entering development stage. Indian app developers like to work on a closed specification because this way they can save surprises and develop the app always knowing the final objective.
When an architect draws a plan of a building, the plan remains intact. Adding and subtracting from the plan can lead to disaster. If a structure was planned for a number of floors, doubling that number usually bring misfortune. The construction of an app follows the same course.
In line with this topic, one of the fears of entrepreneurs and the reason why everyone wants to hurry during the development of a mobile app is the fear of "someone copying your idea". First of all, it is an unfounded fear. Among the more than 2 million applications online, very few are those that have been copied when they were only an idea. Although there are many replicas of successful projects, the apps were not copied but the business model once they were shown to be profitable. A project cannot be so fragile that by just copying its idea will make it become useless. At the end of a project, apart from starting from a good idea, the most important thing your is know-how and execution.
Back