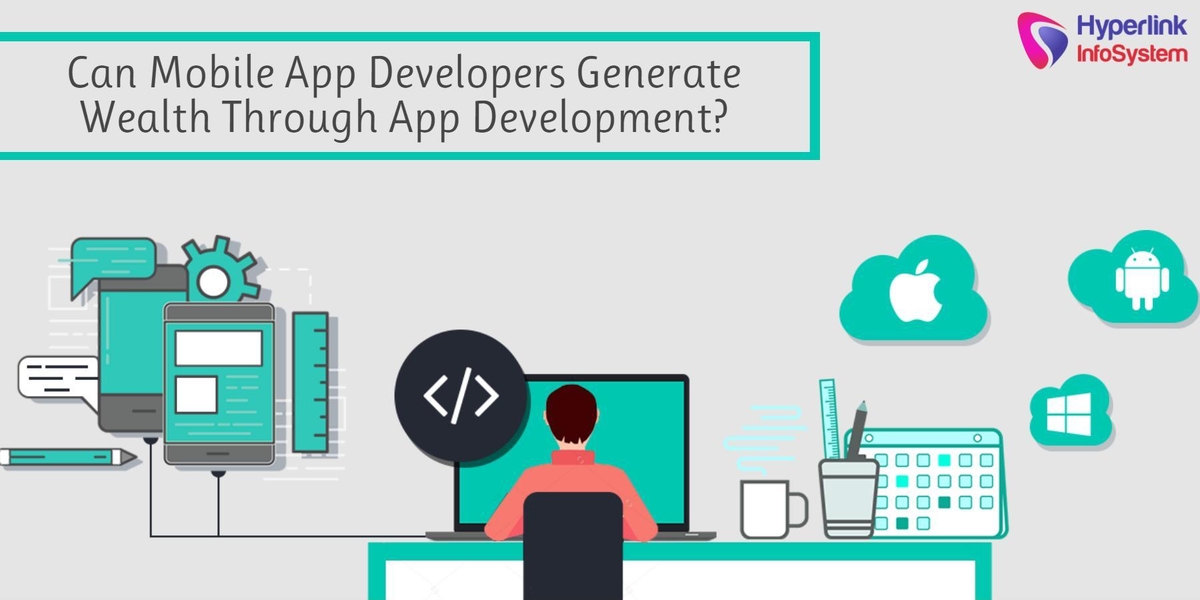 This question has been asked severally, but there is no definite answer to it. People go into business with the aim of making a profit and building wealth. Mobile app developers are no exception. With the consistent technological advancement, apps have become a necessity for most people in the business world. Ordinarily, app developers should be able to create wealth through app development because of the rate at which mobile apps are being used these days.
However, you cannot be quickly drawn to the conclusion that every app developer can get rich through app development owing to the fact that 90% of apps created are free. Studies have shown that people don't get to download apps that are paid for at the same rate that they download free apps. With this, making enough wealth out is practically impossible. Many mobile apps are created for fun, entertainment. Others are meant to raise awareness and for marketing of products or to make a company known. Usually, these types of apps are not created to generate income which is why app developers won't get themselves rich.
Generating more revenue from mobile app development may seem harder to achieve in the future. This is due to the fact that new mobile apps will keep bursting into the scene and developers will keep increasing thereby resulting to a highly competitive field. Making it survival of the fittest, as many app designers might drop out of the competition while those able to stand the competition will continue. Statistically, it is proven that the number of mobile app users has increased by 115 percent between 2012 and 2013.
Also, there are about 200 companies that are involved in the development of mobile app platforms. Having millions of app developers in India this, it is vividly clear that the number of mobile app users will increase rapidly every day. Studies have shown that about one million apps are developed by Apple for its iPhone, iPad and iPad touch. With this, Apple was able to generate $10 billion in 2013, out of which app developers own 70%.
Creating wealth through app development depends on the success of your app. Take into consideration these points:

Idea Creation And Proper Execution
In app development, there are two major things involved. To understand and to execute such idea. Getting the idea of the app you want to develop is not the problem, but the problem is implementing such ideas into a meaningful app. Applying the idea as it will result in developing an app that you want. With proper execution and the all necessary things put into place, there is every possibility the app becomes successful.
New Features
With the consistent advancement in technology, more people stick to using smartphones thus resulting in high demand for apps. An app that can function on new devices even though it has been developed for years is a successful app. New features are created making users update the app as at the right time. There are thousands of app users out there, and this vast number keeps increasing on a daily basis. Successful apps should update its features and designs to the latest ones. It should be noted that when updating the features of the app, the major reason for developing the app in the first place should not be changed. New features installed should make the app simple to use.
Improved Features on UI and UX
Improving the ability to make the users of your app know what they are doing without being confused is another means of detecting a successful app. With the improvement of UI and UX, users of mobile apps will not find it annoying and frustrating to make use of your app. Users who have a wonderful experience while using your app will continue using it. The tools used by mobile devices are not the same. Therefore getting the right tool app that suits the mobile device will enhance the level of users of that app.
Skeuomorphism
This is known as the creation of items that look exactly like its real-world objects. Using Apple as an example, the introduction of the digital calendar instead of the usual desk calendar made it easy to use. With the advancement in technology, more features of the digital calendar thus making it more portable is introduced.
At first, after the development of the app, the user experience and user interface might not meet its user's requirements leaving them rather confused. This will lead to users losing the enthusiasm to use your apps. Most of them will not be comfortable using such apps. To make this app a successful one, all you need is to keep updating the features of the app. Making the UI and UX clear on terms of what the user is meant to do. The new version of the app is developed introducing more features to allow its users easily. The targeted audience without disrupting the purpose of the app is also met.
Using the result gotten from research, Facebook is one of the best apps. Before the introduction of smartphones, Facebook began its journey as an app of being a web app. It was not easy introducing Facebook on mobile devices as a mobile app. This is due to the fact that Facebook users are already used to its web features, and it's format which they use often. Changing it will be pretty difficult for its users.
This posed a huge problem for Facebook application developers as they were trying to meet up with the mobile version of the app. With much effort of the app developers, in 2010, Facebook released its first mobile app. This wasn't so good as it was slow, web-centric and crashed frequently. Of course, UI and UX were not taken proper care of. Users were unable to make use of the app. With the advancement in technology and increasing number of mobile device users, Facebook developed another app this time with improved features and more importantly a better UI and UX. Due to the improved features, Facebook has lots of users which made it a successful app.
Bottom Line
We have come to the conclusion that developing apps can be successful and make the app developer productive. Getting the right idea, executing it and keep updating its features will make users keep on using your app. By taking advantage of the good UI and UX, users will also find it easy accessing your app. Following this guide, Top Indian app developers will achieve success at the end. All app developers should be able to generate wealth from the above guidelines.
Back