Major Blockchain Trends To Observe In 2019 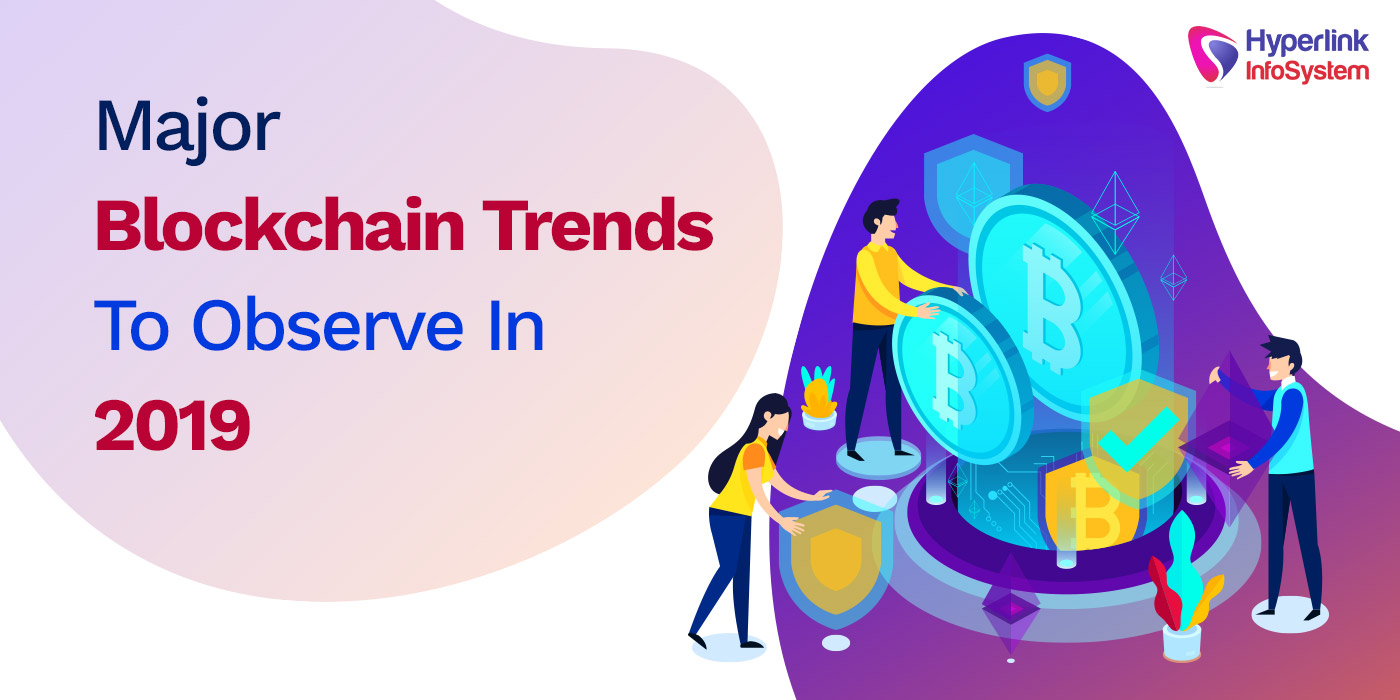 Undoubtedly, the blockchain is still at an early stage of its development, so much so that when compared to other technologies it still has much to offer. However, its growth in recent years has been impressive and its solutions have created new technological limits.
Today, we will explore the blockchain trends for 2019 that should be taken into account. The way in which these aspects are developed will provide a potential scenario for this technology in 2020. You can also take advantage of blockchain technology by contacting top blockchain development companies.
The major blockchain trends for 2019 are:

The hybrid blockchain could be one of the trends to watch during this year. It can be said that this type of blockchain brings together the best of both worlds, providing the best characteristics of public and private blockchains.
For example, a government activity cannot be completely decentralized through the use of a public blockchain such as Bitcoin or Ethereum. However, this does not prevent the implementation of a private blockchain for certain services where interaction with users is necessary.
Precisely in these cases, the hybrid blockchain represents an ideal way to provide a customizable solution, thanks to the attributes of a private blockchain, and take advantage of the security, integrity and transparency benefits of a public blockchain.
2. Federated blockchain
In very general terms, federated blockchains are very similar to private chains except for one small detail: instead of being controlled by a single organization, there are several organizations (integrated into a consortium) that participate in its management. In this sense, the consortium is responsible for authorizing and providing the credentials to run the nodes that comprise it.
Among the most appropriate use cases for the federated blockchains are insurance claims, financial services of all kinds, supply chain management, and food traceability, among others.
3. Blockchain as a service (BaaS)
Due to the costs of time and money, it is very complicated for many companies to embark on the development of their own blockchain platform. It is not always possible to create, maintain and manage a blockchain solution.
To solve this problem, companies can use Blockchain as a Service (BaaS), cloud-based platforms that allow users to develop their own products, including decentralized applications, smart contracts, and other solutions. Through this alternative, you save the need to configure, manage or run blockchain infrastructure.
Currently, there are a few companies like Microsoft, Amazon, and IBM that already offer this service. It is very likely that in 2019 the use of BaaS solutions will increase. Therefore, companies will be able to use blockchain technology without worrying about having to make a considerable initial investment. You can also take advantage of blockchain technology by contacting blockchain development companies.
4. Interoperability between blockchains
The interoperability between blockchains aims to improve the exchange of information between various networks or blockchain platforms. Considering that new value propositions constantly arise for different use cases, they cannot be integrated or it is too much do it for now.
Without a doubt, in the course of this year, we will witness a series of improvements in the interoperability of blockchains. Today there are few platforms that offer interoperability, among which we can mention Aion, WanChain, and BlockNet.
5. Ricardian contracts
The execution of smart contracts is one of the great attributes of the blockchains because they radically transform the celebration of agreements between people and, eventually, inaugurate a new exercise of law. Despite being the essence of decentralized applications, intelligent contracts still have limitations of various kinds, such as security problems and the inability to be read and interpreted by people.
This is where Ricardian contracts could play an important role. Ian Grigg, a financial cryptographer, created this type of contracts to run in Ricardo, an asset transfer system - named after the economist David Ricardo, considered one of the most influential thinkers in classical economics with Adam Smith and Thomas Malthus.
The Ricardian contracts can be verified and signed cryptographically, at the same time, they can be read and interpreted by the individuals. This means that both computers and humans can use these legal instruments without the need for intermediaries.
6. Security Coin Offering

In 2017 and 2018, we witnessed the rise and take-off of ICOs as a new way to obtain liquidity to finance projects in the crypto world. However, close to 80% of ICOs have been scams or failed projects, causing the loss of investor confidence. Likewise, in the vast majority of jurisdictions around the world, ICOs are an unregulated mechanism for raising money.
In contrast, the value tokens are issued under the support of security coin offering (STO) that operates under a regulation. Therefore, there is a clear process to raise money and finance startups that work on blockchain projects, generating confidence and security in investors and reducing the risk of fraud.
Considering that an STO requires formal management to exist, its administrative, operational and legal costs are usually greater than those of an ICO. STOs are not yet a popular option. However, it is expected that throughout this year, the main cryptocurrency exchange houses will include them in their portfolios.
7. Digital assets in financial institutions
Although this trend began strongly in 2018, it will continue in 2019. Several companies from different sectors are exploring how to apply the blockchain technology in their processes, but the financial industry is betting more on the market of the cryptocurrencies, despite the overwhelming downturn suffered during 2018. The reason is as simple as that they are aware that the cryptocurrencies have come to stay.
In this environment, interesting projects such as Fidelity Investments, which is building an exchange and storage platform for cryptocurrencies has arisen. Another project that deserves special attention is Bakkt, an exchange and custody platform where the Intercontinental Exchange - owner of the New York Stock Exchange -, Starbucks and Microsoft are behind.
These are some of the blockchain technology trends for 2019. You can also take advantage of this technology by contacting blockchain development companies.
Back