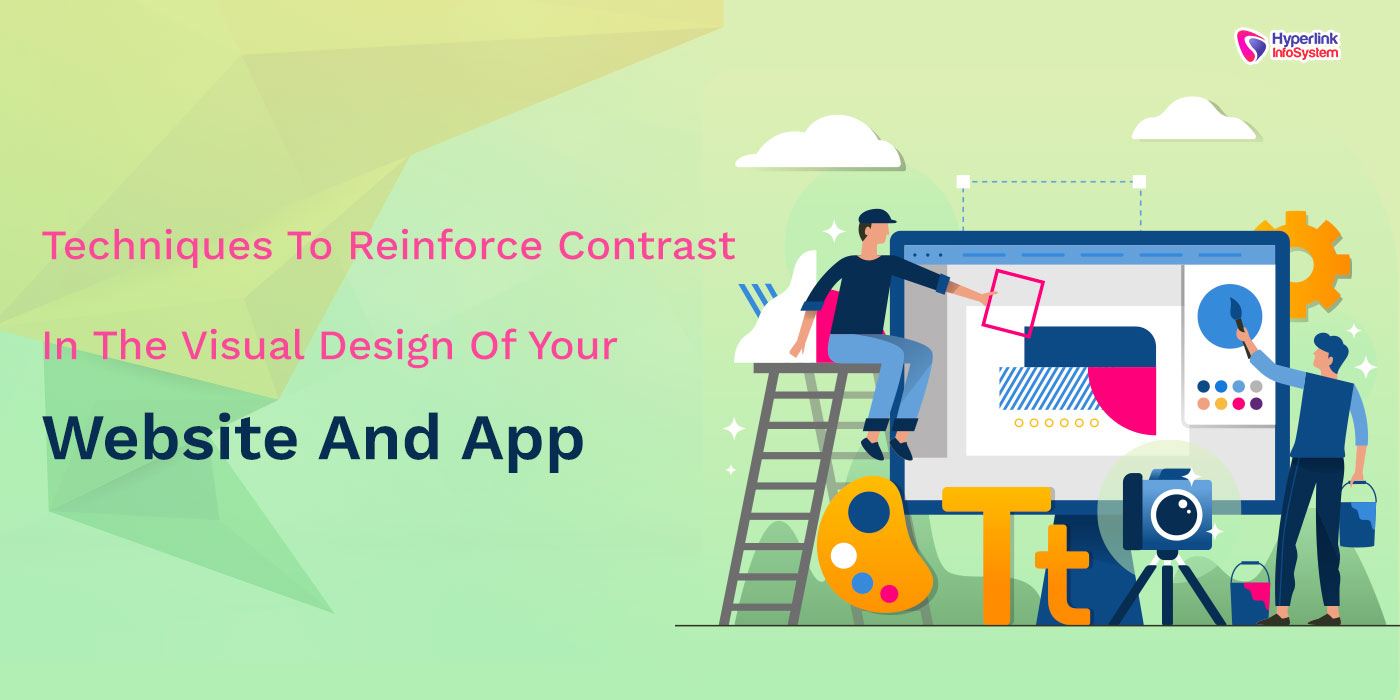 There are several characteristics that all visual design must have. Some of them are harmony, balance, and contrast. Without contrast, the entire design looks fairly uniform. The whole design must look like a set, as part of a whole, but it is also essential to offer variety to be able to guide the user's view to more relevant elements.
There are several strategies used by app developers India to create or reinforce the contrast in the design of an app. In this article, we will explain five simple techniques commonly used to reinforce the contrast of your web and app design.
Resize an item
Symmetry can be a "double-edged sword." On one hand, it can help you organize the elements of your design and thus achieve a pleasant design. On the other hand, if you use many elements that have an equivalent visual weight, the design might look uniform, a feature that makes visual reading difficult. A simple solution to this situation is to highlight the desired element by size. In that way, said element becomes the focus of attention and the user's view will immediately be directed to that area of ??the design.
Modifying the size of an item, be it an image, a block of text or a call to action button, not only alters its physical appearance, but also its visual weight. A larger element, as usual, will attract people's attention first.
Add textures to the design

Flat style and minimalism are current trends in website design. With the popularization of these styles, it is uncommon to find web pages that make use of textures, as was done previously. Although it is not a common practice, you will find some exceptions that still make use of textures.
Combining the flat style with the textures is not illogical it helps to create a point of attention. The most common alternative to combine textures with elements other than three-dimensional style is to place the texture as a background to generate contrast. However, there are other ways to use textures. For example, if you want to place illustrations or fonts that have a handwritten or handmade appearance, placing a texture as a background could be a wise decision.
Use different ways
For designs with similar elements, those elements that are different than the rest will stand out. Much of the elements found in designs are likely rectangular or quadrangular. This form also applies to texts and the user usually sees it as blocks and depending on the number of words you decide to include this block of text could be rectangular or quadrangular. So if you add, for example, a circular, hexagonal or any other element, it will stand out from the rest and generate contrast in the design. Changing the orientation of some element will also help to create a focus on that element and generate impact.
Add or remove colors
Color theory is one of the most important knowledge for web and app developers India. By understanding the classification and relationship of colors, you can change the "environment" and the message to be transmitted from a design with the simple change of color in a particular palette. Apart from taking color theory into account, you should also take into account the contrast of the color palette you have created. Some of the most effective combinations are not only achieved by applying knowledge of color theory, but also by understanding contrast.
One of the simplest ways to start with the study of colors and understand the contrast between each of them is by reviewing the color circle. Certain essential combinations are based on contrast. They include:
- Complementary: Two colors found in equidistant points on the color wheel. For example, red and green.
- Triad: Like the complementary ones, these three colors are equidistant from the color wheel. You can easily form a triad by drawing an equilateral triangle in the chromatic circle.
- Similar complements: You select a color from the color wheel, the others depend on your first choice because they are those that are on both sides of the complement. In this way, you have a palette of three colors.
These are the basic combinations with which you can start creating color palettes. By making small changes, you can end up with a more interesting color combination. It all depends on the concepts you have learned from color theory and from practicing a lot by creating color palettes.
Add unusual items

Often, an unusual detail or element can add the necessary contrast in visual design. It must be an element that is different from the rest, but that is consistent with the site. That is, that there is harmony between all the elements that make up the design. Some of the actions you could take to add contrast to your design could be the following:
- Add a different element in a design pattern.
- Change the size or position of an item in a row or set
- Use different resources, for example, use illustrations and photographs in a single design.
- Change the orientation or alignment of graphic elements or texts.
Adding contrast in design immediately generates impact and finally, this is one of the objectives of any web page: to capture the attention of its visitors.
By modifying the appearance of a group of elements, you create a point of attention focused on that element. Visual reading is also affected by the change in contrast in the elements, after all: the hierarchy depends largely on the visual weight of the elements. You should always contact app developers India for your app projects.
Back