The Four Fundamental Principles Of The Operation Of Bitcoin 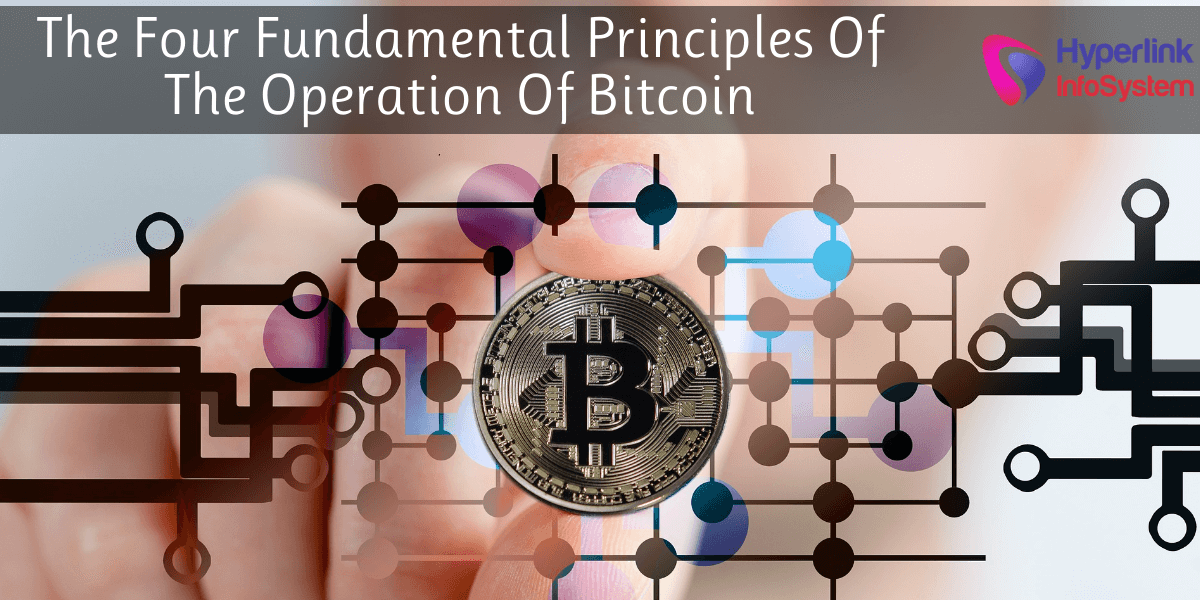 For some, understanding cryptocurrencies especially Bitcoin can be complex. We will try to describe the four fundamental principles of the operation of Bitcoin.
The principle of the virtual wallet: the "Bitcoin Wallet."
You need to choose a wallet that you will install on your computer or mobile device. It's a bit like the existing applications for conventional banks today: you can check your balance, make transfers, etc. Then your wallet, also called "Bitcoin Wallet" will create your first Bitcoin address. To make transactions or simply receive bitcoins, you will need to communicate this address to the person in question. In the same way, you can pay people if they give you their addresses. To roughly summarize, exchanging Bitcoins is quite similar to exchanging emails or making a transaction with Paypal. Then all you have to do is get a few Bitcoins and keep them safe.
Bitcoin uses public and private key cryptography. A "room" contains the owner's public key. When a piece is transmitted from a user A to a user B, A adds the public key of B on the piece, then the sign with his private key. B then owns the piece, and can, in turn, transmit it.
A public (but anonymous) list of all past transactions is collectively maintained by the Bitcoin node network to prevent A from transmitting to a user C the part already used. Thus, it will be verified before any transaction that the piece has not yet served.
The principle of the blockchain: the "Blockchain."
The blockchain is public and shared transaction log on which the Bitcoin network is based. All confirmed transactions are included in the blockchain. Thus, each user can easily verify that each new transaction exchange bitcoins belonging to the issuer of the payment. It's a bit like the call log of your phone; it indicates the calls received and issued, except that here the blockchain is public and concerns bitcoin transactions. Thus, it is not possible to "cheat" with bitcoins.
The principle of the transaction
As mentioned above, to make a transaction, you need a virtual wallet. Then, it will create an address that will communicate to the person with whom you want to make a transaction.
There is also the principle of private keys that are contained in Bitcoin wallets and are used to sign each transaction, providing mathematical proof that they come from the right owners. The signature also has another advantage: it fixes the transaction and thus prevents any changes after the signature. All transactions are broadcast between users and are confirmed by the network in the following minutes via a process named mining.
The principle of mining
Mining is a system for confirming pending transactions and therefore for including them in the blockchain. The mining serves in particular to:
- impose a chronological order in the blockchain;
- protect the neutrality of the network;
- allow network computers to agree on the state of the system.
To be confirmed, the transactions must be included in a block that must correspond to very strict cryptographic rules that are then verified by the network. These rules prevent the modification of an earlier block so as not to break the logic. Thus, no one can control what is included in the blockchain or replace parts to cancel its transactions. This practice is therefore called mining. You should hire blockchain developers for blockchain technology.
Advantages of bitcoins for companies

The use of bitcoins has multiple factors that can be used to improve the company irrespective its size. Reduction in the cost of transactions, greater anonymity and privacy and fewer errors in transactions, are some of its benefits.
Bitcoins have revolutionized the world of finance, and that includes small and medium enterprises. Although at first, the currency was not recognized by many people. It has now been imposed on the market as the most beneficial currency to market. The use of bitcoins has multiple factors that can be used to improve companies operation.
Reduce the cost of transactions
The banking transactions usually have a considerable cost, as a consequence of the commissions that are charged in the process. On the contrary, bitcoins are coins that are accessible to anyone. The commissions are usually imposed by the digital platform in which they will be invested, but the amounts made by the transactions provided they are from the traditional digital and non-banking medium, are usually low.
Guarantees identity protection
In such an exposed world, privacy is basic. Anonymity and privacy were two of the characteristics that led to the bitcoin being considered an ideal cryptocurrency to legalize fraudsters' money, in addition to the dark web's favorite. However, several years have passed since that situation, and nowadays bitcoin can be invested in thousands of secure servers, in which millions of people have deposited their funds. The money will always be anonymous, and the transactions will not reveal the identity of the parties.
It does not produce as many errors in transactions
Frequently, many errors are often made in business transactions. Thanks to bitcoins, this can be avoided, since its operation is based on programs and softwares prepared so that its structure remains stable and can respond to the market. Also, it is a common denominator among bitcoin transactions that refunds are not allowed, precisely to avoid fraud. The transactions are irreversible and are registered.
Facilitates the arrival of new audiences
Companies often have very clear strategies to manage their brands and thus reach their target audience. The participants of the current economy adjust to it with great ease and add it to their daily lives. That is why working with virtual currencies is so beneficial and well seen by this generation. Bitcoins are often chosen by many companies of different sizes to attract younger audiences.
Allows greater expansion
Many companies choose to invest in bitcoins to encourage their international growth. The reason for this is that bitcoin is a global currency, without nationality limits or changes imposed by banking entities. It is a decentralized currency, so it has no disadvantages when used from any website that has that function. The use of bitcoin is thus an effective method to achieve the financial freedom that so many wants.
Attract more customers and workers
By including the bitcoins as payments for the company, advertising is generated automatically. The payment in bitcoins is innovative because it attracts many people who see how they can revalue the value of their work as the bitcoin goes up its quotation.
Be part of an advantage position
Bitcoin, like any other investment, is part of a bet. Currently, only a small portion of companies involve bitcoin in their finances. However, this factor means that thousands of companies in the world bet on bitcoin from now on, which will make them stand out in the future if this cryptocurrency exponentially increases their value, as well as their participation in the financial market. You should hire blockchain developers for blockchain technology.
Back