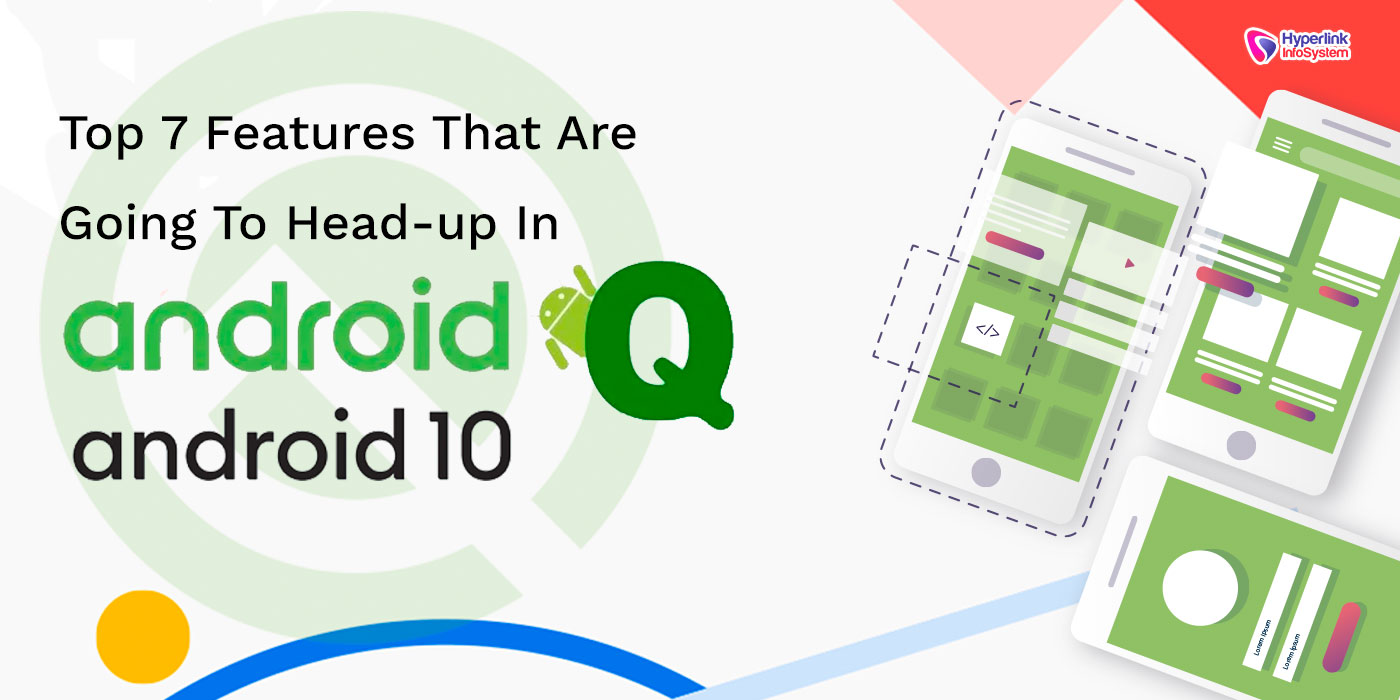 No matters what happens, Android is still ruling the smartphone since its initial release 23 September 2008. The image of Android is getting transformed by each of its updates with its features and the name of the version that always found with some desert’s name where the latest released in 6th August 2018 version named as 9.0 “Pie”.
The next version of Android is almost given a preview by Google and named it as Android Q which has been shifted from the regular manner version of the desert name. Android Q is officially named as “Android 10”. The reason behind the change of desert nickname is not always understood by the global community.  The logo of Android Q is quite interesting with its robot head seems to be hiding the exciting features that are going to function with its properties.
Here are the top 7 features
Every android new version comes up with new features. The same Android Q is also getting some hot update with its feature. It seems to be focused on security settings, new gestures and quick settings but even though there are lots of updates is there to unpack. Let us look at the new features serving up by the Android Q.
1. Privacy has been focused
Android Q is majorly focusing on the privacy side with offering a feature by Google for the permission for the app. That gives you more control over the amount of data that you share with apps. Let me give you an example, for instance, if an app is using your location in the background it needs clear permission to access it. The features that are now like runtime permission can access the location when an app is running and can limit the data or information that a particular app can gather in the background. The location access by the app can be lockdown by Android Q and also you can control the photos, videos, and audio files that are accessing by the apps using the new runtime permissions.
2. Themes and Accent colors

There is no dark mode but you do get the option to change the accent of colors on android 10. You just have to enable the option from developer settings: go to Settings -> About Phone, and click Build number for 7 times and enter your PIN or password to enable the option.
Then navigate to the Settings -> System -> Developer options and scroll down to the bottom of the page. You can see the option for the theme, featuring with changeable colors, icons, and font headline and body font.
Accent colors are limited to 3 options for now:  black, green, and purple and the default color blue. You can also change the icons from the system default circle to teardrop, squircle, or rounded rectangle, and the font to Noto Serif. There are also multi themes provided by the theme engine but this will available on Android Q by any means.
3. Recording the Native Screen
The feature that has been waited for a long time, native screen recording is now given by the version of Android 10. You need to look into the developer option to enable it. And the feature will work fine and give you the ability to record the screen and the voiceover too. To enable the option, go to Settings -> System -> Developer options and scroll down to the Feature flags set in the Debugging sub-menu.
Toggle settings_screenrecord_long_press to on, and then you can record the screen. To use the feature, hold the power button and long-press the screenshot button to open the dialog box with the options such as to launch the feature, hold the power button to pull up the menu, and long-press the screenshot button recording audio and showing on-screen taps, and a button to start the recording. Then select it to use the feature to record the native screen
4. App info with a detailed view
Android Q has designed the info page of the application in a well-established manner. You can view the count of the notification from a particular app that provides you by app developers along with the notification channel. It also divides the data consuming app in both mobile data and the Wi-Fi. And also to open the app that is getting to force you to stop or uninstall a new icon is created.
Sharing the menu has made faster in the Android Q. To share content into another app using the shortcut menu loads very quickly. This is an evolution of features from Pie to Android Q to share the content.
5. The notification gets smarter

To the notification feature, Android Q has made a change. You may dismiss the notification with swiping itself but now if you swipe at the right side you’ll dismiss them and a swipe to left the notification get into action. This allows you to view the estimated battery life in the quick settings pane itself.
6. Native Desktop Mode
When you connect to the external monitor Android Q will switch to the desktop mode. You can move apps anywhere on the screen, open multi-windows and interface the looks with it-self as a version finds on Pixel with a navigation bar at the bottom and status bar at the top.
7. Option to save during Wi-Fi Usage
Have you ever faced a situation like getting out from the app when the Wi-Fi has been suddenly disconnected? Then with Android Q, you’ll have a floating settings UI pane that can automatically display option when the problem arises. Let me give you an instance if the Wi-Fi network doesn’t have connectivity the chrome detects and shows up the setting tab for with option Wi-Fi, mobile data, and airplane mode.  This feature is enabled to avoid the loss of connectivity disturbance without leaving the app.
Still there to update
The above features that I have mentioned were some of the updates and still more to introduce by the Android Q. I hope, you may get some information based on the version of Android Q.
Back