Native, HTML5 or Hybrid: Which Mobile Application Development Options are fit for you? 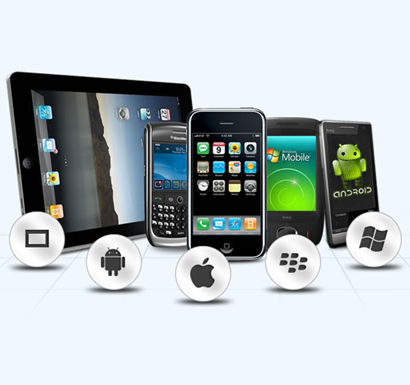 There are some hardware in your gadget that are necessary if you are to be able to download an app into it. For instance, the screen size of your gadget might seem to be a no-brainer but actually it is very important to consider screen size because of the way the app user interface is displayed onscreen. Since smartphones nowadays have touchscreen capability, the screen size will also influence how well your app will function on your preferred gadget. Another important factor to consider is the memory of your gadget – an app takes up a lot of space in the memory so it is vital to choose a gadget that will allow for some flexibility in memory size. 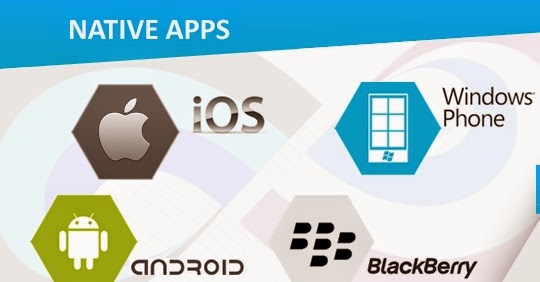 Now, what is native mobile app development? At its simplest, native apps are software that were designed to really fit a particular platform. A good example of a platform that carries native apps is Android. You have probably read somewhere that an Android app development India is specific to Android smartphones, for one thing. The same holds true for iOS - an iOS app will only work on an iOS smartphone. The big difference is that Android smartphones can only carry apps that were coded with Java or Eclipse while an iOS gadget can only be fitted with apps that rely on Objective-C or Xcode. The reason the app is dubbed "native" is that it is "native" or matches that platform only. 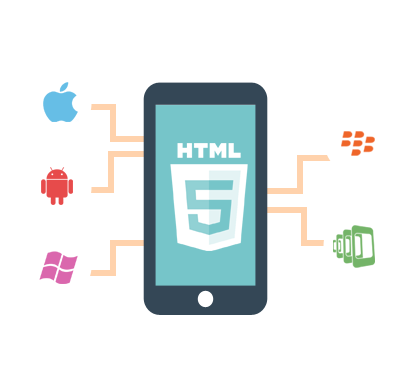 On the other hand, what is HTML5 and what does it have to do with mobile application development? An app under HTML5 category is coded using standard web technologies - in this case with HTML5 markup language. However, an HTML5 coded app can also be coded with JavaScript as well as CSS (also called Cascading Style Sheets). The value of an HTML5 app is that it can be accepted over a wide variety of mobile devices, not just a gadget that runs HTML5. In sharp contrast, a native app can only be run on its native platform. However, there are some functions of an HTML5 app that are not accepted on some gadgets – examples of such functions are the functionality of native apps such as use of pre-installed cameras.

Because of the difficulty of relying simply on a native app or an HTML5 (especially if you are the type to switch gadgets often), the hybrid app concept was born. Basically, a hybrid app is made using HTML5 code which is then encased with an external native app code. This does not make the hybrid app the cure-all solution for all mobile app development problems because there are limitations of the native app and there are also limitations for the HTML5 app that become apparent when a hybrid app is developed. However, it may be desirable to get or develop hybrid apps when you have to share gadgets or want an app that can be downloaded into multiple types of gadgets. 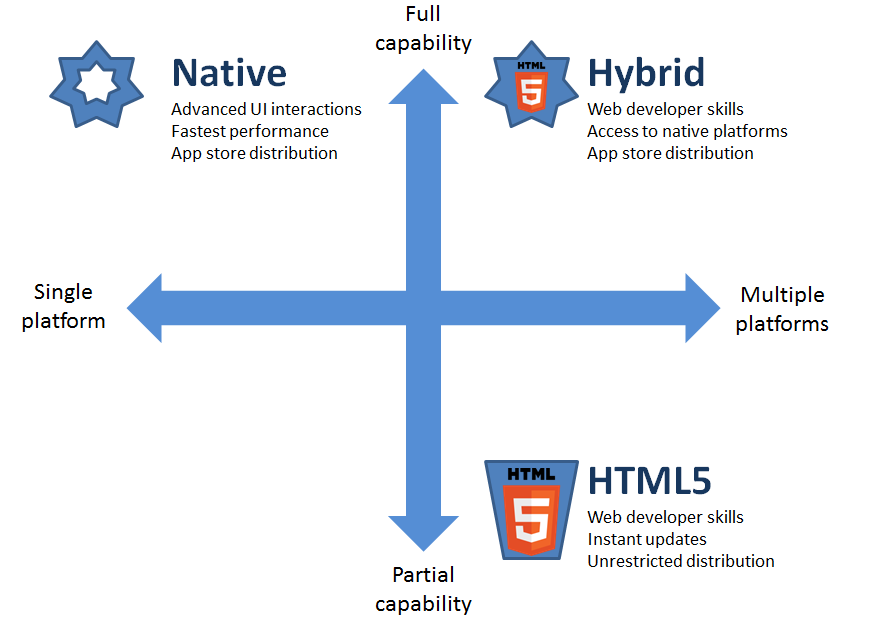 So which of these three (native, HTML5 or hybrid) is the superior app development type? Developers consider the native app model to be the most attractive to use because this sort of app tends to function best among the three. And that is not surprising because of the code platform that a native was designed for. Hence, an Android phone will run Android apps best while an iOS phone will run iOS apps best (to each his own). The hybrid is the least desirable of the three because it does tend to have glitches or weaknesses in the software that pop up when you least expect it. The HTML5 occupies a neutral position somewhere in the middle because it is most compatible with different gadgets.

Knowing this, you probably should start out your app development efforts by attempting to code native apps first. You stand to benefit from some features that native apps are known for. For example, the multi touch feature of your native app will help a user carry out some actions called "compound User Interface gestures" which includes double tapping and pinch spreading. Another good feature is the fast speed by which graphics are run on your device - this is possible because the code is particular and specific to the gadget platform and thus has lesser possible glitches compared to HTML5 and hybrid apps. Speed is desirable especially if you tend to run a lot of transactions or gestures on your gadget or if you lack time or perhaps simply want a fast experience on your smart gadget.

Of course, the hardware you use will also dictate what kind of native apps you will be using. Hence, a native app that is appropriate only for Android gadgets will require the specific hardware of an Android for it to run seamlessly. On the other hand, a native app that can be run on iOS platform will require use only of an iOS gadget for it to function perfectly. Some hardware brands are more desirable than others too.

Another advantage of using native apps on the appropriate gadget is that you can scout around for apps that are also appropriate for that gadget without having to worry about compatibility. So if you have an Android phone you needn't worry that an Android app in the online store will be compatible. That is one problem you will encounter with a hybrid or an HTML5 app actually. 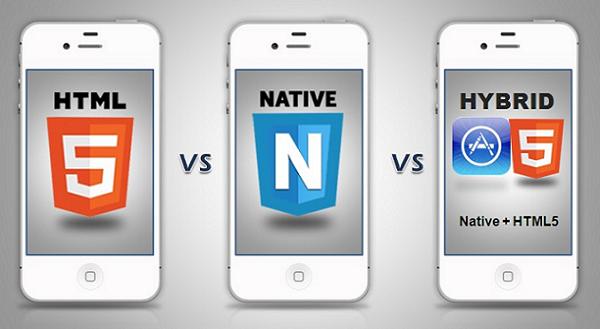 For an app developer, another plus in favor of native apps exists, namely that you can take advantage of the volume of information available nowadays about the use of native apps. If you intend to become proficient in making apps, it pays to focus on the most popular platforms for native apps which are iOS and Android. So if you go into making iOS-compatible apps then focus on that. The same holds true for Android application development India. The benefit of this is that you can focus on the nitty gritty details for each platform which is great if you want your customers to have a bug-free experience. And that means that customers will be more satisfied with your app in the long run. (And of course that paves the way for repeat business for you). Some developers might argue that native apps are harder to develop but that is debatable.

Some might argue that it is preferable to be proficient in native, HTML5 and hybrid app development all at the same time. Well, if you're that proficient then lucky you. But if you wish to become a specialist in the least amount of time, perhaps focusing on a native app platform would be a good step forward for you. That way, you can get the credentials under your belt before you shift focus to other types of apps. This makes it more organized and your customers will be impressed by your skill level.

Cost of development is another aspect to mobile application development that you should be aware of. Your idea for a new app might be attractive on paper but you definitely want to rein in expense control to remain profitable. That is another reason some developers stick it out with native app development - the parameters are already pre-set so it is easier to estimate the cost of development even before the project starts. The last thing any developer wants is for runaway expenses to halt an app development program mid-way. You can imagine how costly it is to develop a hybrid or HTML5 app in this regard. 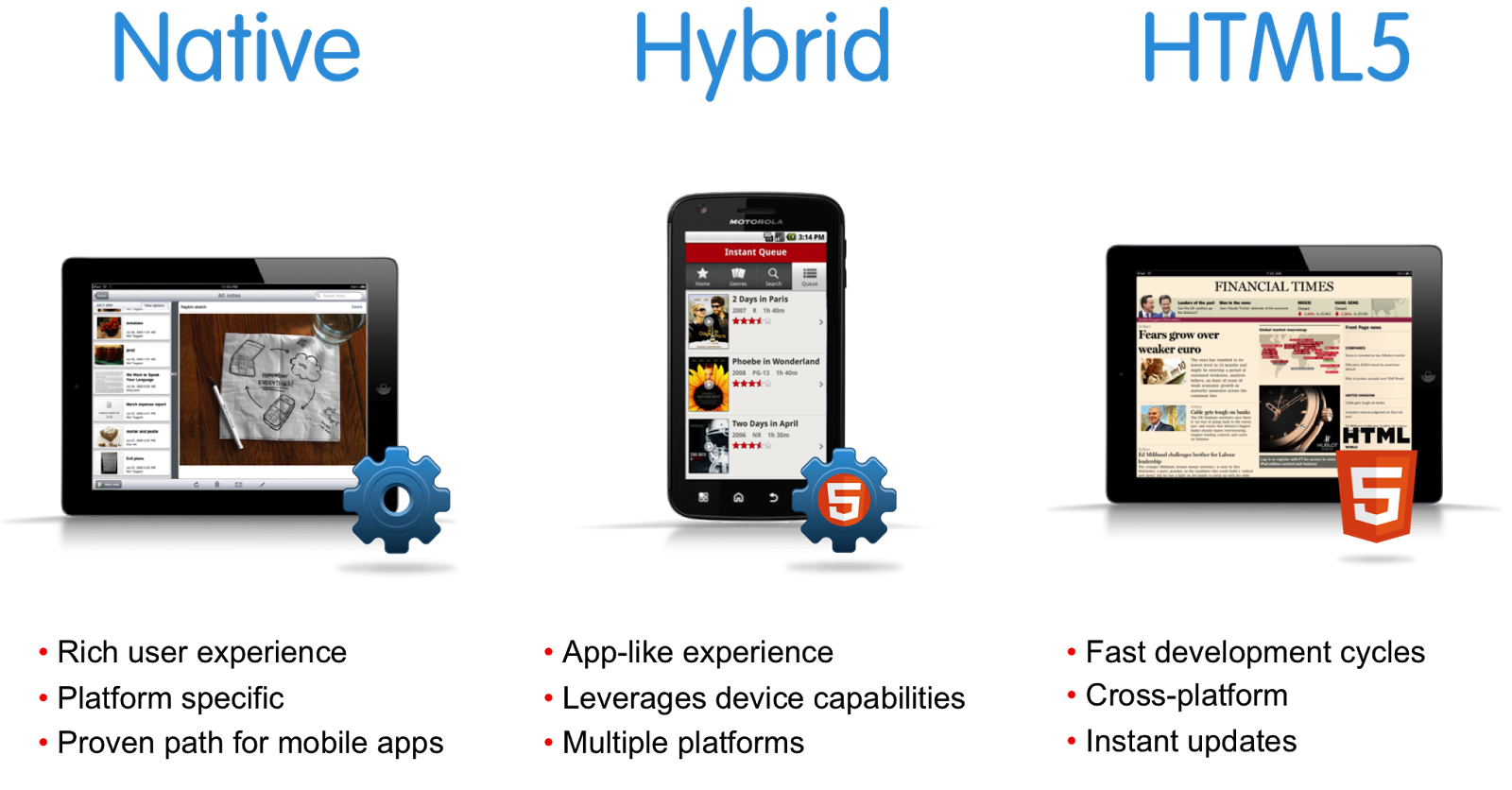 Mobile app development is a growing industry so naturally you want to remain competitive considering there are now thousands of app developers doing business on the Internet.The good news is that market demand is also growing exponentially, so if you manage to get the training you want for the native, HTML5 or hybrid app categories you have a pretty good chance of staying competitive within that crowd. Applying that strategy, Hyperlink Infosystem is counted as one of the leading Mobile app development companies in India. In the final analysis, it is the end user who will dictate which apps will be downloaded often and which will lie gathering dust somewhere in the app store shelf. So anyone who wants to succeed in mobile app development would do well to keep a finger on the pulse of consumer demand to be able to predict which apps will survive. Contact us for more information on the cost, features, technologies of mobile app development on any platform.