What You Must Know About Grocery Shopping Mobile Applications 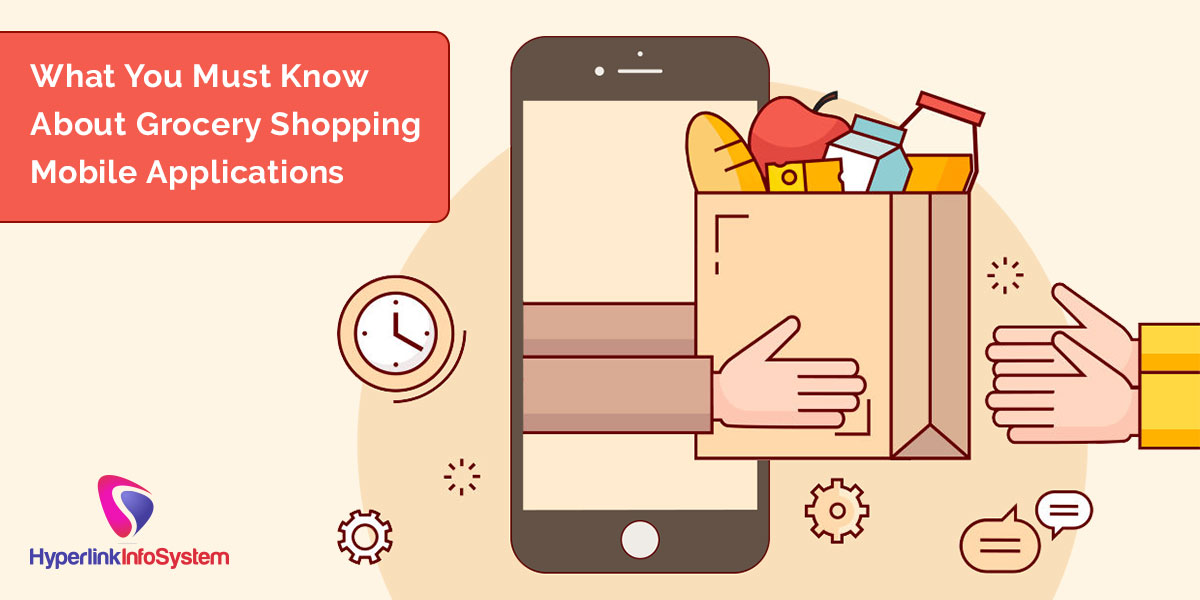 The insatiable desire to save time and money and to effectively organize daily routines has triggered a lot of technological advancement. Having to do house chores daily could be herculean and an unpleasant task for some people. Grocery shopping simply worsens the situation.
Statistics show that two-thirds of household shoppers prefer shopping on their mobile devices and as expected, mobile app developers have taken advantage of a business opportunity.
To develop mobile apps suitable for grocery shopping, you must consider what the users want. They are looking for apps that respond to their requirements and needs. Such apps should be intuitive and easy to use. Users want to reduce impulsive spending and efficiently plan their family budget. They will always shop with apps that can help them in this regard.
People prefer apps where they can buy all the items they need in the shortest possible time. They love apps that have coupons, loyalty programs, discounts, etc. so that they can save costs. Successful grocery shopping apps like ‘AnyList’ and ‘Grocery IQ’ take these into consideration.
For your app to be successful, you must pay attention to its unique features. Below are the most and least desirable features of a grocery shopping mobile app.
The Most desirable features of grocery shopping apps: 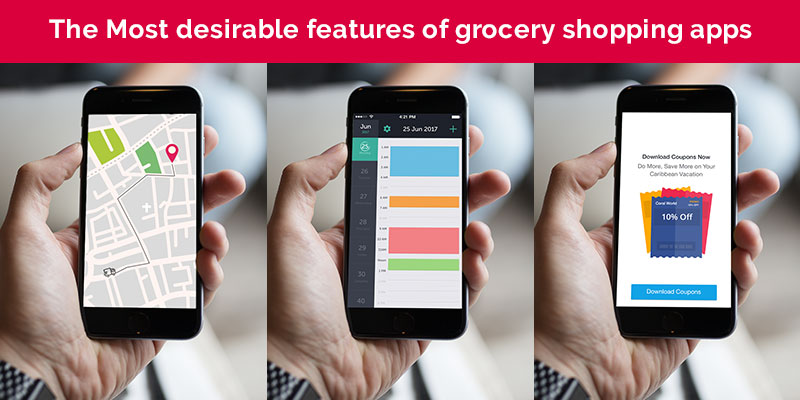 1. Can Track Their Spending Habits:
In a bid to cut down cost, users want to be able to track their spending habits. They need apps with an overview and infographics which indicate how they spend most of their money and recommend how to cut down such expenditure. It will interest you to know that top grocery shopping apps tend to ignore this very important feature completely.
2. Have Grocery Shopping List Reminders:
People can get so busy that they forget to shop. They would welcome a grocery shopping app that reminds them to buy a standard list of groceries like bread, egg, and milk before they run out of them. For example ‘Daily Bread' works with the built-in Reminder app to alert users when they are about to run out of groceries.
3. Have Coupons And Loyalty Programs:
Most users are interested in coupons and loyal programs. They want to apps that will help them turn the coupons into real money savings. ‘Grocery IQ’ has been helping users use their coupons for discounts. It is even more interesting when these apps have gaming features. The hunt for coupons can be very exciting.
The three least desirable features for a grocery shopping app:
Some users not interested in apps with generic geo-location notifications because it is a privacy concern for them. Research revealed that these users wouldn't mind trading location information for something more valuable such as coupons, a list of stores, or a digital offer.
Studies also showed that when it comes to location information, 65% of consumers preferred retail brands to general shopping apps and social platforms.
Another least desired feature of grocery apps is the strong social media integration. A 2014 survey showed that people prefer the ability to track their spending over being able to sign-in to a shopping app with social networking sites.
In an attempt to stand-out from the crowd, mobile app developers may tend to add too many unnecessary features to grocery apps. Users do not like being slowed down because of apps with complicated features. Various notifications, constant reminders and could be a major turn-off.
Sometimes simple app like ‘ShopIt’ with a grocery shopping list is just enough to get the job done.
The different functions that most grocery shopping apps have: 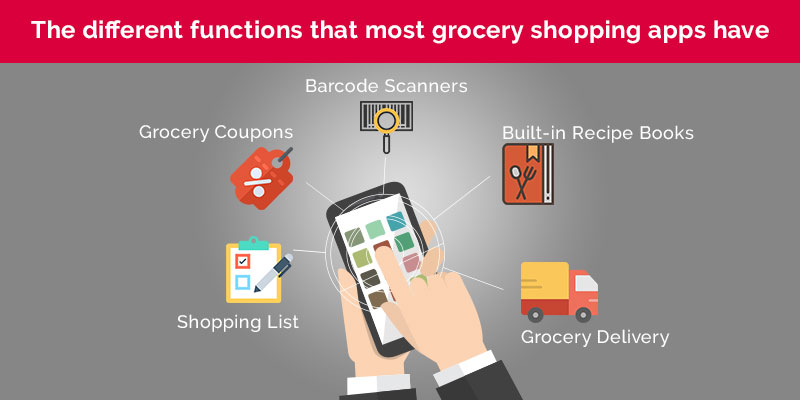 1. Shopping List:
Most grocery shopping mobile apps have an in-built shopping list with dictionaries. All entries are automatically added to the dictionary for easy reference. Some of them include barcode scanners, email sharing, and online list updating.
2. Grocery Coupons:
Grocery shopping apps use coupons to reward their consistent and loyal users. There are different types of grocery coupons, both paper and digital, for different kinds of discount programs and sales (whether daily or weekly). As users add new items to their list, they are immediately notified of an available coupon to print or load to their loyalty cards. The coupons can be redeemed at participating stores and savings are automatically deducted at checkout.
Some of them use a current shopping list, user location or previous shopping history to generate the relevant coupons.
3. Barcode Scanners:
This is a very important feature of grocery apps. Barcode scanners help users access as much information as they can on products within a short time. They also give useful information about products, such as their nutritional value and dietary recommendation. Users can scan groceries by placing their phone camera at the bar code of the items. The price will be displayed on the screen. After that, the item can be added to an electronic shopping cart.
With this feature, users can now eat healthier and more nutritious foods. They can watch their weight and manage conditions like diabetes, Celiac disease, high blood pressure, etc. This feature also benefits vegetarians.
4. Built-in Recipe Books:
Many popular grocery apps have built-in recipe books. This feature makes shopping even more convenient. As users add recipes, all the items needed to make the meal are automatically added to their grocery list. A recipe book can have over 300,000 recipes, featured collections as well as menus.
The built-in browsers on some grocery apps help users import recipes they found on the web to their personal recipe list. The apps will store the recipe, and the users can add or remove existing ones.
5. Grocery Delivery:
Apps that help provide grocery delivery services to their users are in high demand. As a result, mobile app development companies have designed grocery delivery systems that allow users place their orders from different stores and have them delivered within a short period. Not only is this system fast and cheap, but it also allows users to add items from the different stores into one order. Giants like Walmart and Amazon are in the process of developing their own delivery system.
People want to be able to cook and eat, but many are either too lazy or busy to pick up groceries at the store. Knowing that with just a few clicks on their internet-enabled mobile devices, they can buy and pay for groceries and have them delivered to their door is enough to brighten their mood after a very long day at work.
As a mobile app developer, you must ensure that your grocery shopping app satisfies the needs of your users. Also, pay attention to User-Interface. A user-friendly interface will be successful amidst other grocery shopping apps.
Back